Amber Heard's testimony included a number of terrifying incidents incited by her ex-husband. 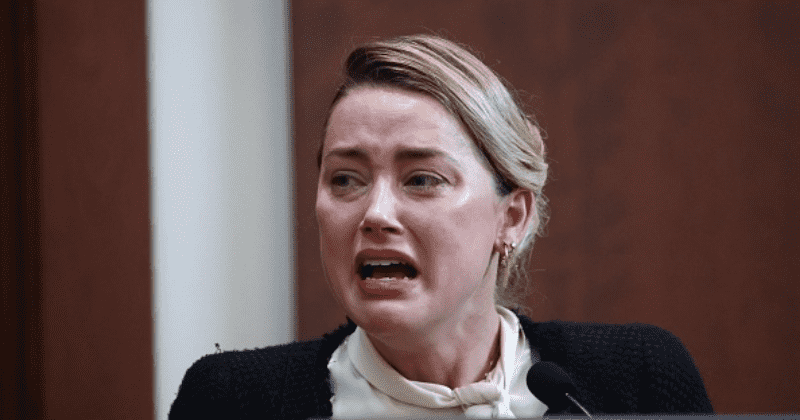 Trigger Warning: This story contains graphic details of physical and sexual abuse that may be disturbing to readers.

Amber Heard broke down in tears on Thursday as she accused Johnny Depp of sexually assaulting her with a bottle. After three weeks of sitting silently in the courtroom during Depp's testimony, she is finally on the stand and sharing her side of the story. Johnny Depp is suing his ex-wife for $50 million over a Washington Post op-ed in which she claimed to be a survivor of domestic violence. The 36-year-old actress is countersuing for $100million and sharing deeply disturbing allegations against Depp. The Oscar-nominated actor has always denied his ex-wife’s allegations that he physically abused her while they were together. The pair married in 2015, then they broke up in May 2016, when Heard sought a domestic violence restraining order against him. They settled their divorce out of court in August 2016.

#BREAKING: Amber Heard has broken down in tears, saying Johnny Depp sexually assaulted her with a liquor bottle and threatened her life during a trip to Australia. #DeppVsHeard https://t.co/QDQoKv6SNK

The Aquaman actress claimed Depp had sexually assaulted her in their rental home in Australia shortly after they married. According to PEOPLE, during her second day of testimony in Depp's lawsuit against her, she recalled, "I'm on the countertop, he had me by the neck. It felt like he was on top of me," an emotional Heard shared. "I'm looking in his eyes and I don't see him anymore. It wasn't him, it was black. I haven't been so scared in my life. I couldn't see him. He was looking at me. I was trying to get through to him, to say in some way it was me. I was trying to get through to Johnny. I couldn't see him. I couldn't see him at all."

"My head was bashing against the back of the bar and I couldn't breathe. I remember trying to get up to tell him he was really hurting me. I couldn't breathe. I couldn't get through to him. I couldn't get up.  I didn't think he knew what he was doing." Heard then broke down crying before she continued, "The next thing I remember I was bent over backwards on the bar, I was staring at the blue light. My back was on the countertop. I thought he was punching me. I felt this pressure on my pubic bone. I thought he was punching me. I could feel his arm moving. It looked like he was punching me. I could just feel this pressure. I didn't feel pain, it was just pressure on my pubic bone. I don't remember what I said, I just remember being really still, not wanting to move. I remember looking around the room, I remember looking at all the broken bottles, broken glass, and I remember not wanting to move because I didn't know if it was broken, I didn't know if the bottle that he had inside me was broken. I couldn't feel it. I didn't feel pain, I didn't feel anything. I looked around and I saw so much broken glass I didn't know if he would know if it was broken or not and I remember thinking please 'God please, I hope it's not broken.' I just remember being in the bathroom. I remember retching, I remember the sound my voice was making. I remember I lost control of my bladder. I remember just retching, there was blood on the floor," said Heard. The actress added that she can't recall how the assault ended. She added, "The discomfort I was feeling afterwards just paled in comparison to how scared, shocked I was, scared."

#BREAKING: Amber Heard has broken down in tears, saying Johnny Depp sexually assaulted her with a liquor bottle and threatened her life during a trip to Australia. #DeppVsHeard https://t.co/QDQoKv6SNK