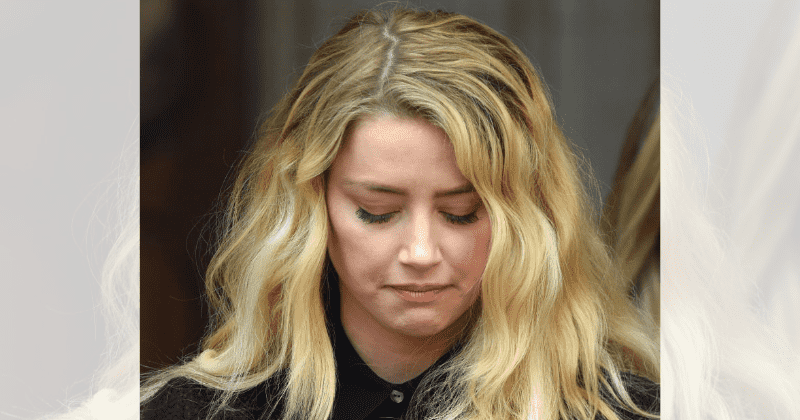 Trigger Warning: This story mentions physical abuse that may be disturbing to readers.

Amber Heard took the stand for the first time in Johnny Depp's defamation trial against her, where she spoke of the first time her ex-husband allegedly hit her, according to PEOPLE.

On May 4, 2022, the actress' attorney Elaine Bredehoft asked Heard to recall the first time Depp "physically hit" her. Heard—who had earlier testified about their relationship being "always intense" from the start—said she will "never forget" the moment because "it changed my life."

Heard, 36, said the first time it happened was when she and Depp were having a "normal conversation" on the couch about a tattoo on his hand. It was early on in their relationship and Heard reportedly asked Depp what that particular tattoo meant because it was "hard to read."

When he explained it, Heard laughed, which allegedly pissed him off. "It was that simple. I just laughed because I thought he was joking. And he slapped me across the face," said Heard. "I laughed, because I didn't know what else to do. I thought, 'This must be a joke.' ... I didn't know what was going on. I just stared at him, kind of laughing still, thinking he was gonna start laughing too to tell me it was a joke. But he didn't."

She then said Depp slapped her again and called her "a funny bitch."

"It was clear it wasn't a joke anymore," Heard added, who said she didn't know how to react next. "You would think you'd have a response, but I, as a woman, had never been hit like that. I'm an adult and I'm sitting next to the man I love and he slapped me for no reason it seemed like. I missed the point. It was that stupid."

Heard was taken aback by the slap, and all she could do was continue staring at him. This prompted Depp to slap her "one more time, hard." Getting visibly emotional, Heard said she lost her balance, causing her to fall to the carpet.

"I knew it was wrong. And I knew that I had to leave him. And that's what broke my heart. ... I wish I could sit here and say I stood up and I walked out of that house and I drew a line and I stood up for myself," Heard said while crying on the stand.

Depp’s team also shared a recording in which Heard admits to hitting but not “punching” Depp.

She then went on to reveal that Depp began crying, with "tears just falling out of his eyes," as he pleaded to her from on his knees. "I will never do that again. I am so sorry, baby," he assured her.

Previously, when Depp took the stand, he was asked about the alleged tattoo incident. There, he said that the moment "didn't happen" and added in his testimony: "I've never struck Ms. Heard. I have never struck a woman in my life. I'm certainly not going to strike a woman if she decides to make fun of a tattoo that I have on my body. ... That allegation never made any sense to me whatsoever."