Bindi said that Grace is transfixed when she sees grandfather Steve Irwin while watching documentaries. "It's so fun to watch her study him." 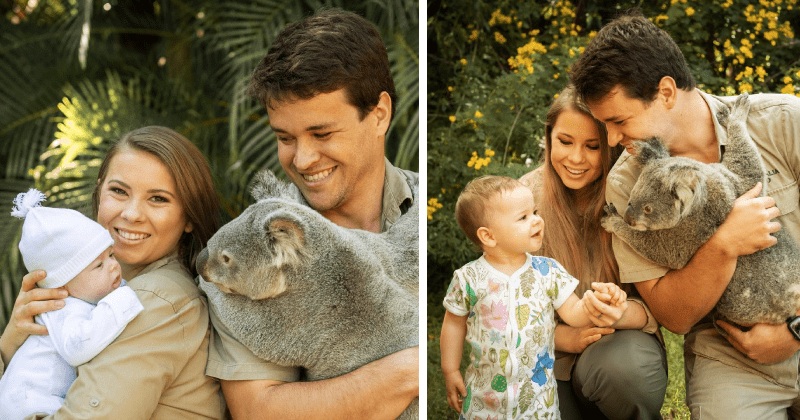 The Irwins' love for wildlife runs in their blood and Bindi's daughter is no different.

Bindi Irwin's daughter Grace Warrior Irwin Powell is a year old and the proud mom shared heartwarming pictures of her daughter from a year apart. Bindi shared the then-and-now images and we can't help but smile at how adorable it is.

The first picture shows Grace's dad, Chandler Powell holding a koala while his daughter, Grace, in her mom's hands, curiously stares at the animal. It was Grace's first tryst with a koala. The second picture showed Grace standing on her own and looking at a koala with much fascination. As with the first picture, the koala was holding onto Chandler Powell, 25. It was only a few months ago that Chandler and Bindi celebrated their daughter's first birthday, according to My Modern Met.

Watching their daughter grow to love animals just as they had has been a wholesome experience for the family and all of those who have followed the Irwins, starting with Bindi's father, Steve Irwin, the legendary 'crocodile hunter.'

The photo showed how time flies. “Today & one year ago,” wrote Bindi Irwin on the post. “Our girl is still admiring koalas.”

The pair often share pictures of themselves from the zoo taking walks and also document Grace's love for animals. They recently shared a video of Grace taking her first steps and captioned the video: “Big moment.”

Bindi, 23, was beaming from ear-to-ear as she beckoned Grace to walk towards her Dad who was holding the camera. She has also started saying words and it's not surprising that in a video, she randomly uttered the words “sea turtle” while looking out at the animals in the water.

Bindi says she is often fascinated when she sees images of Steve Irwin on TV. "We have so many documentaries of Dad, and we're always playing them for Grace," she told PEOPLE. "It's so fun to watch her study him. I didn't realize how much Dad's passion for life and his animated facial expressions — I mean, they captivate her."

"She just stares at him in complete and utter fascination. She hangs on every word he says. Whether he's talking about a croc or a spider, she thinks it's amazing," said Bindi.

Steve Irwin, known for his love for animals and his wildlife documentary television series "The Crocodile Hunter", passed away after being stung by a stingray on September 4, 2006, when he was 44. Bindi was just 8 years old at the time.

Speaking of how things would be if her dad was alive, Bindi says, "He would be in love. He'd just have her doing everything with him. We would only see her if she needed a feed and then be gone again."