Maybe finding your child's room littered with a variety of dinosaur toys or finding books about them everywhere may not be such a bad thing at all. If they can rattle off the names of even the most uncommon dinosaurs, it's a sign you are raising a genius. 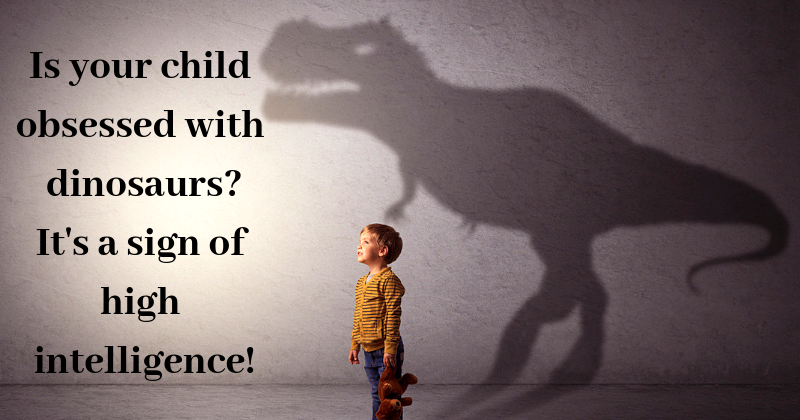 Been noticing that your child constantly plays with dinosaur toys? Or that the names of various dinosaurs just rolls off their tongue? Have you lost count of the number of times you have had to act afraid while they pretend to be a T-Rex? Is every birthday cake of their a dinosaur-shaped one? Well, fret not; there's reason to be happy because research has found that your child's dinosaur obsession actually indicates their higher intelligence.

How can a dinosaur obsession indicate your child's intelligence?

According to research, when we are interested in the things we are learning, we tend to pay more detailed attention to it. As a result, we are also processing that information more efficiently and thus using more effective learning strategies. Psychologist Paul Silvia of the University of North Carolina suggests that not only does interest “diversify experience," it also "focuses experience."

So when your child is fascinated with the dinosaurs, it causes them to seek out more information about them, thus improving their knowledge and attention focus. That's why they can rattle off the names of various dinosaurs and sometimes the complicated scientific names that even adults have a hard time pronouncing.

What is this based on?

This extensive knowledge that children have about dinosaurs is based on a psychological phenomenon called "Intense Interests" which is characterized by a strong motivation for a specific topic. Almost a third of children are known to have developed this intense interest at some point throughout their childhood between the ages of 2 and 6.

In some cases, while most children might grow out of it, some children continue to have that interest in their later childhood stages as well as adulthood. While not all children are obsessed with dinosaurs, some of them can name numerous stars in the sky or various species of birds. In the end, no matter the object of their passion, the effort that they put into learning about that passion is what matters.

What was the study?

The study included 215 children (90 girls and 125 boys) between the ages of 4 and 4.6 years. It was conducted by first asking parents of the children what their child was specifically interested in. Then the researchers watched how the child interacted with what interested them over a period of two years.

Over those two years, the parents kept the researchers up to date about their child's play interests and other activities through 13 bimonthly interviews. Parents were asked to report how much of free play-time was allotted to their child and what they liked during that time. The researchers also questioned the parents as to whether their child's interest was very focused which was characterized by the extended amount of time (one month) they spent with that interest. They also asked if their child's activities were constantly varying with their interests changing often.

The study also stated that "if a child’s interest was described as focused, parents were asked to identify the particular topic or domain of play (which was then coded as an individual interest)."

Finally, when the study was over, the results showed that children with focused interests can cause “increased knowledge and persistence, heightened attention, and deeper levels of processing” in children.

So then what do dinosaurs have to do with higher intelligence?

The way in which some children study their object of interest - in this case, the dinosaur - increases their knowledge because they have the urge to learn more about it. This can improve their attention span and enhance their skills of complex thinking. It has also been proven that their linguistic abilities are also improved and they are able to develop the skills of higher understanding.

The study also explains that this interest is a way to prepare them for life. The way they interact with their dinosaurs helps them navigate new situations and problems they face throughout their life by asking questions that they need to find the answer to. These intense interests give them the opportunity to change their perspectives, find new ways to do things, create relationships and most importantly, learn to be independent.

Paleontologist Kenneth Lacovara has had parents coming to him and telling him how obsessed their child is with dinosaurs. His theory is, "I think for many of these children, that's their first taste of mastery, of being an expert in something and having command of something their parent or coach or doctor doesn't know. It makes them feel powerful. Their parent may be able to name three or four dinosaurs and the kid can name 20, and the kid seems like a real authority."

Therefore, by encouraging your child's interest in dinosaurs, you are actually helping them become smarter and independent individuals.