The clip, which has been viewed over 10 million times, begins with the teenager putting on makeup in his room while filming the process on his phone 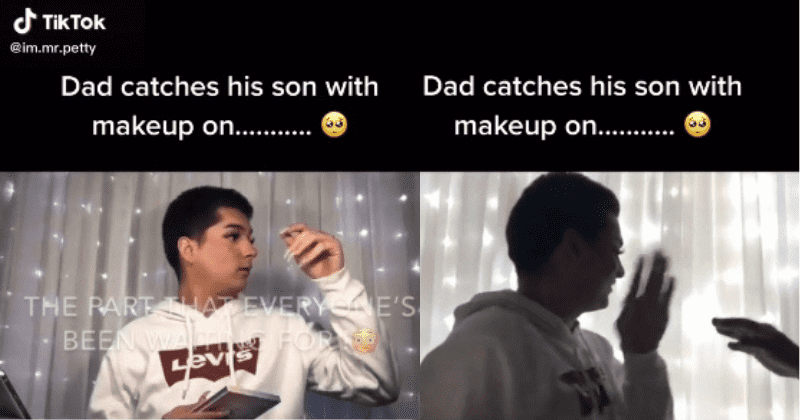 A TikTok video went viral this week for all the right reasons. It shows the heartwarming moment when a dad embraced his son after accidentally walking in on him applying makeup. The clip, which has been viewed over 10 million times, begins with the teenager putting on makeup in his room while filming the process on his phone. Suddenly, his dad starts knocking on his bedroom door and the boy immediately turns down the lights so that his dad won't be able to see his face. But his dad gets suspicious and asks him what he's up to in Spanish. When the boy says he's making a video, his dad turns on the lights and sees his son wearing make-up.

"I was sooooo embarrassed," reads the video's on-screen text. But to his surprise, he didn't really have to be embarrassed. When his dad asks, "Is this what you want to do, Papa?," he tells his father to just disregard whatever he did and looks away self-consciously. That's when his dad diffuses the awkwardness with a reassuring statement, "Because if this is what you want to do, you’ll be okay. I’ll be okay with you," before taking him into his loving embrace.

"I love you, Papa," continues the sweet father, according to Pride.com. "I love you. If that makes you happy, do it. Do it, but do it good. OK, Papa. I’m always with you. I won’t let you down in anything. Be happy." This powerful video just goes on to show how parents of LGBTQIA+ youth can support their kids just by accepting and loving them for who they are. Now that the teen's dad knows about him, the boy no longer has to hide from his true self in his safe space. Surely, he feels more supported and confident in doing what he loves.

Many studies have revealed that parental acceptance and rejection have a huge implication on the LGBTQIA+ youth's identity and health. A study of "sexual minority adolescents and young adults" that aimed to examine the associations between "parental acceptance and identity profiles that were affirmed as opposed to being characterized by struggle" found that "less parental rejection was associated with a greater likelihood of having an affirmed identity than struggling with one’s identity,70 suggesting that the level of parental rejection may affect youths’ ability to accept their own sexual minority identity." It went on to reveal that family rejection might have serious consequences for LGBTQIA+ youth’s physical and mental health and that it is associated with "health risk behaviors and poor mental and physical health outcomes among LGBTQIA+ individuals."

In another study that focuses on transgender youth, it was revealed that "Parental support was significantly associated with higher life satisfaction, lower perceived burden of being transgender, and fewer depressive symptoms." Families play a protective role in the lives of young children and so parents of transgender youth may be presented with a crucial opportunity to offset the mental health impact of societal harassment and discrimination that their children are subjected to. Finally, the study found associated parental support with a higher quality of life which includes protection against depression in transgender adolescents. It also noted, "Interventions that promote parental support may significantly impact the mental health of transgender youth."

LGBTQIA+ youths, who are rejected by their families, are more likely to experience high levels of depression, attempt suicide, use illegal drugs, and engage in unprotected sex. Thus, the first step is acceptance. They say love conquers all and even in this case it surely can. Parents should not shy away from showing physical affection or from supporting, and reassuring their children no matter their sexual orientation and identity.