The six-year-old Connecticut boy is in the hospital after suffering horrific burns. 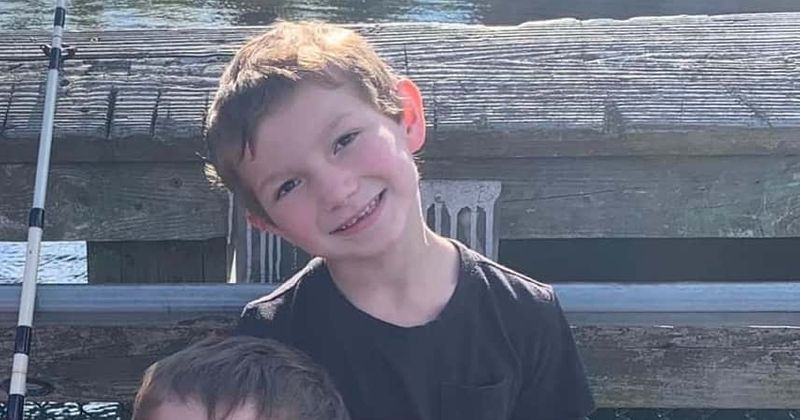 Trigger Warning: This article contains graphic details and images that may be distressing to readers.

A six-year-old Connecticut boy was taken to the hospital after his neighbor allegedly set him on fire this weekend in Bridgeport. Little Dominick Krankall's sister took to GoFundMe to share his story, writing: My little brother Dom has been bullied for a while by the neighbors. It escalated to a deadly intent. Dominick, MY 6 YEAR OLD BROTHER could’ve died. The kid covered a ball in gasoline, lit it on fire, and threw it at him. All in the matter of SECONDS. Dom has second and third degree burns on his face and leg. He’s going to be scarred for life mentally and physically. We are looking for help for a new home because it is not safe here. This bully has gotten away with too much and has a history of bullying. The mother thinks he is innocent. The family thinks it’s a joke. Even though Dominick can’t talk because he’s in a lot of pain and all swollen, he said to my mom, “Please don’t take me back there.” Anything helps, even a share. Thank you all for the support. I’m sure Dominick appreciates it. This is extremely unfair and shouldn’t ever happen to ANY CHILD!!! We need justice for our little Dominick.

A 6-year-old boy is in for a long recovery in Bridgeport after his family says he suffered burns to his face and leg this weekend.

The community is coming together to support Dominick Krankall as he receives care in the hospital. Hear from family tonight on @FOX61News at 10&11. pic.twitter.com/rZmP5rMwCf

According to WFSB, Bridgeport officials said, “Preliminary reports indicate that up to four unattended children were seen playing with gasoline and lighting objects on fire.” The little boy's family claims the burns were a result of bullying. Aaron Krankall, Dominick’s father, said a neighbor’s kid threw an object lit on fire at his son’s face. The bullying began last year, he claimed. “Pushing ‘em, tripping ‘em, there’s always been some type of issue. Don’t get me wrong, sometimes they can all get along and play. It was nice. But then there’s always, one of my kids always comes home crying,” said Aaron. Now he doesn't know when his son will be out of the hospital. “All he wants to do is go outside and play, he keeps saying when can I go out and play again. Can’t give him an honest answer, we were supposed to go fishing Sunday night. That was our plan,” said Aaron.

A Connecticut boy has been hospitalized after suffering severe burns on Sunday in what his mother calls a case of bullying. https://t.co/iWYipy0Hzp

Police are now investigating the incident, according to ABC7. "I heard him screaming, 'Mommy help me, they set me on fire,'" Maria Rua, the boy's mother, told the outlet. Laura Giacobbe, mother of the neighbor's children, is blaming the boy's mother. "There was no bullying, whatsoever, involved. None," Laura Giacobbe said. Maria Rua had agreed to keep an eye on the boys while she went out, she said. "She neglected these children outside. She neglected them. If your child is being bullied, would you leave your child out with somebody being bullied? That's the question," Giacobbe said. A security camera that overlooks that backyard is being used by the police as their investigation continues. "I will not stop, though, until this kid gets put away because this is not okay. I need justice for my son," Aaron Krankall said.

A 6-year-old suffered severe burns in what his family described as a case of bullying in #Bridgeport. Now, they're looking for help for his hospital bills and a new home. https://t.co/lyHRGtdEac