"He is old enough to make his own choices about his hair and body,” his mother wrote. 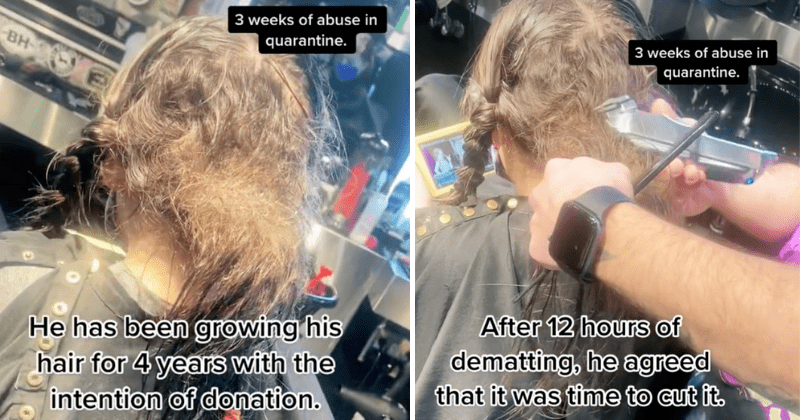 A little boy who had been growing his hair out for over four years because he wanted to donate it was forced to get it all chopped off because of his grandparents. The boy, who was quarantined with his grandparents didn't have anyone to help him comb his hair for over three weeks, making it matted. It was beyond salvageable and the only thing left to do was to shave it all off.

A mom, who goes by @xanthehorrorfan on TikTok revealed that her trust was broken after her 8-year-old son came back from his grandparents' place with hair that was tangled beyond fixing. They hadn't brushed his hair even once, revealed the furious mother.

“They neglected him because they felt that boy’s shouldn’t have long hair,” the mom explained in the video’s text overlay. The video then showed the little boy at a salon as stylists use detangling sprays to try to get the knots out.

The mom explained that her son had been growing his hair out for four years "with the intention of donation."

However, even after 12 hours of hairstylists trying to get his matted hair combed out, there was no process, and her son finally agreed to cut it. The video then shows a stylist sectioning off the matted hair and shaving it from her son’s head.

As for why the boy's condition got so bad, the mom explained, “He is able to brush his own hair but sometimes has trouble with the back.”

"His grandparents refused to help because of their own personal beliefs and claimed my son is to blame for his hair matting," the mom continued. "My son still wanted to keep as much as he could for when he is ready to donate to Wigs for Kids,” she added. "He is old enough to make his own choices about his hair and body.”

At the end of the video, her son was left with an undercut and was able to keep most of his long hair, but the mom is still furious at what happened.

"Matted hair happens from neglect and abuse,” she wrote. “No child should have to go through this physical and emotional pain. The last three weeks with his grandparents have changed his life and I will never let that happen again.

@xanthehorrorfan I will always support my son’s decisions as long as he’s not hurting himself or others! #hairdonation #donation #hair #growth #support #love ♬ She Share Story (for Vlog) - 山口夕依

In a follow-up video, the mom explained that her son had been visiting his grandparents when they all became exposed to COVID. That's when they all agreed that it was better for them if they were quarantined together until their test results were back. “By the time they got their results, it had already been five days in quarantine before the 14 days start,” she explained, “which is why they were quarantined for three weeks.”

The young boy was also COVID positive and the only mode of communication with his mom was over a video call. The woman said she frequently reminded her son to brush his hair and his teeth, but he told her that he was having a hard time reaching the back.

“He asked his grandma to help brush his hair, but it just turned into a major verbal disagreement,” she recalled. “She would yell at him to sit still and say some very unkind words that I’m not going to repeat.”

She tried her best to get in touch with his grandparents, to tell them how to talk to him and to brush his hair, but couldn't get through to them. As a result, the boy's hygiene was completely looked over. In fact, he had only showered twice during those three weeks, the mom revealed.

“What happened during that quarantine was completely unacceptable,” she said. “As soon as it ended, he was back in my care.” The mom said she’s no longer going to allow her son to stay with his grandparents and said that they haven’t been in contact since. “I did what I thought was best to assist him in quarantine,” she said at the end of the video. “Other people might have their own opinions, but at this point we can’t fix the past.”

"I will always support my son so long as he is not hurting himself or others," she added in the comments. "He already has good moral values and I am raising a wonderful tiny human."