Fun Test: Here’s What Your Sleeping Pattern With Your Partner Says About Your Relationship

How do you sleep with your partner? 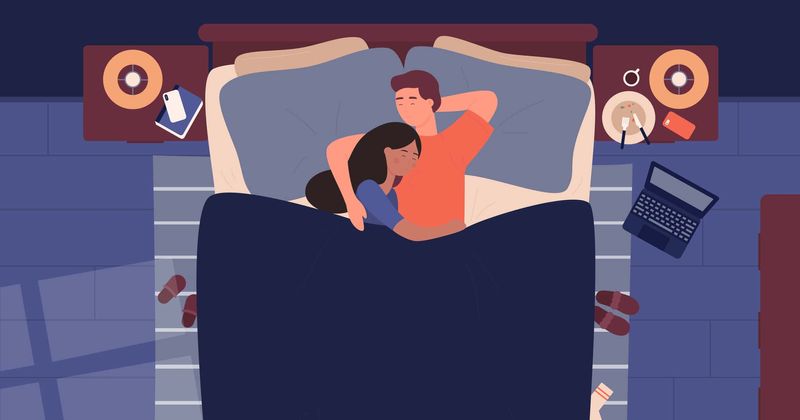 All of us need to get some sleep to function, but even in bed, the position in which we sleep, both alone and while sharing the space with someone else, has a lot to say about our personalities. Fascinating, isn't it?

Basically, when we're in deep sleep, our subconscious minds take over. Because of this, the body language we use with a partner while we get some shut-eye can be a remarkably precise way to understand what's going on in our relationships.

"Even if you can't or don't articulate those things while you're awake," says Patti Wood, a body language expert with more than 30 years of experience, according to HuffPost. Here are the eight most popular couple sleeping positions and the secrets they have found about each.

A study done by relationship psychologist Corrine Sweet shows that this position is adopted by one-fifth of all couples. It demonstrates a dynamic in which, " One partner takes a protective stance over the other." While this seems like a sweet position, this can also turn things steamy. "It's a very vulnerable position that's sexual, but says, 'I trust you,'" said Patti Wood.

When you and your partner face the opposite sides of the bed with some space in between your backs that are facing each other, it does not mean that something is wrong with you. In fact, it is a good thing. Sweet shared that couples that sleep back-to-back without touching are "connected and secure in themselves. This position shows both closeness and independence in the relationship." Also, 27 percent of couples prefer this sleeping style.

Considered to be even more intimate than the spoon, the tangle is a position adopted by couples that are fairly new to the relationship, or when there are either intense emotions at play. Some couples adopt this position throughout their relationship, but that may not always be a good thing.  According to Elizabeth Flynn Campbell, a New York psychotherapist, "[the couple] could be overly enmeshed, too dependent on each other to sleep apart."

This is the same as the liberty lovers, but just that there is no space between your backs. According to Sweet, this means, "Both partners are relaxed and comfortable with one another." However, this position is more common between newer couples or those that have been together for under a year, when compared to couples who have been together for a long time.

When one partner rests their head on the other's chest, while their legs are intertwined is a position that is most commonly seen in early relationships and occasionally renewed flames. This position also creates a sense of protection, per Shirley Glass, a psychologist and marital therapist. "There's a high level of trust here," as this snuggling position has a "strengthening sense of comradeship and protection," shared Glass.

If your legs are tangled when you're sleeping, this means that you both just cannot get enough of each other, even while sleeping. "It means your lives are intertwined, that you function as a pair. You probably finish each other's sentences and take care of each other," Wood said.

Among all the positions mentioned, this is probably the only one that shows your partner is selfish. "One partner dominates the space, while the other takes a secondary role," said Sweet. The dominating one in the relationship is the one that makes all the calls in the relationship, and if this describes you, then it is time for you to have rather a difficult conversation with your partner.