When she got home, her husband was waiting to help her with the bags. 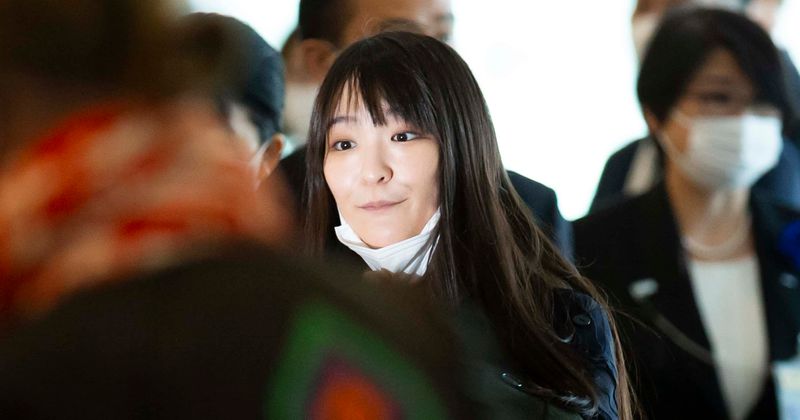 Mako Komuro, Japan's former princess, is now an adult trying to find her way around the Big Apple. The newlywed moved to New York with her husband Kei Komuro, after giving up her royal title. The eldest daughter of Crown Prince Fumihito and niece of reigning Emperor Naruhito was spotted at a Bed, Bath & Beyond, where she picked up some home essentials for her 1BHK home that she shares with her husband, reports Daily Mail.

The couple, who got married in October, flew in from Tokyo just a week ago. Mako was spotted alone at the store, with no security detail protecting her. She was also sporting a much more casual look than the formal outfits she regularly wore back home in Japan.

After her shopping, it seemed like the 30-year-old got lost, and had to ask multiple people for directions, but nevertheless, she remained unfazed. She eventually returned to her apartment in Hell's Kitchen around 6 pm, and her husband—who was at the entrance of the apartment complex—helped her with the bags.

Princess Mako goes out alon in NYC, gets lost and confused (and asks strangers for directions) but remains unfazed and eventually finds her way back to her apartment where Mr. Komuro met and helped with her four shopping bags. The girl has gumption!https://t.co/uNLsYtqWXu pic.twitter.com/3Dup4OSW7n

The couple lived out of a modest apartment in Tokyo before moving to New York where Komuro works as a lawyer at the New Jersey-based law firm Lowenstein Sandler LLP.

Mako, along with giving up her claim to the throne in order to marry a commoner, also declined a 140 million yen ($1.23 million) payment she is entitled to receive as a female royal after they lose their imperial status by marrying a commoner. The reason the former princess refused to accept the money is due to concerns that a controversial marriage might benefit from taxpayer money, according to NPR.

It was further revealed that the initial plan was for the two of them to get married three years ago, after their engagement was announced in September 2017, but it was pushed due to disapproval of her groom, because of a financial dispute involving his mother.

Komuro responded: “I love Mako. I live only once and I want to spend it with someone I love.” He said he hopes to be with Mako to share feelings and encourage each other in happy times and difficult times. “I hope to have a warm family with Mako-san, and I will continue to do everything to support her,” he said.

ICYMI: Japan's former princess Mako, who married her college sweetheart last month and gave up her royal title, left the country to start a new life as ordinary citizens in the U.S. https://t.co/PGuxoPpF96 pic.twitter.com/lwk9ovrpS6

It truly is a new start for the couple. Here's hoping they find strength during the tough times and warmth on the good days!