Griffith was just 14 years old when she first met the then-22-year-old Johnson. As soon as she turned 18, they married each other. 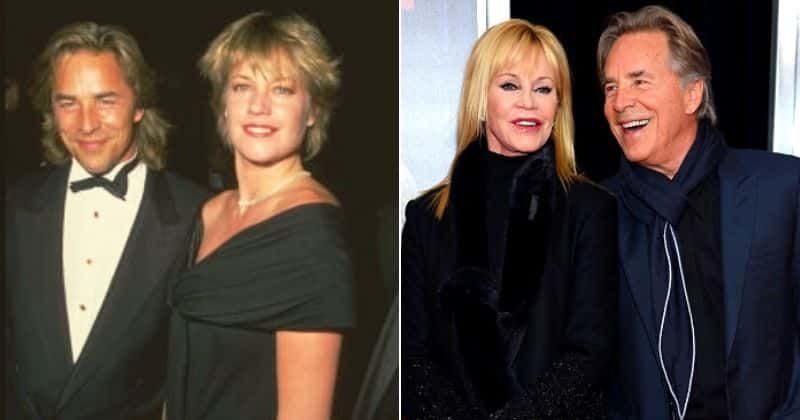 When Oscar-nominated actress Melanie Griffith and Golden Globe-winning actor Don Johnson met in 1972, they felt that their connection would last forever. But the couple experienced a fair share of ups and downs in their relationship. By ups and downs, we mean they got married, got divorced, married again, and then finally went their separate ways for good.

Back in 1972, Griffith was just 14 years old when she met the young and handsome 22-year-old Johnson on the set of The Herrad Experiment. Recalling their first meet, Johnson told The Hollywood Reporter, "We were in the stairwell of this Anheuser-Busch Estate waiting for a setup. We started chitchatting." The Lolita actress thought Johnson "was the most beautiful person I'd ever seen."

In today's time, the relationship between the two would have created a ruckus because of the actress being underage, but back then, looks like it wasn't a big deal. However, Tippy Hedren, Griffith's mother, had her doubts. "They were two beautiful, wonderful people, and here, my daughter was showing signs that I had never seen before in her, with an older man, and there was just sheer panic," she told the outlet. "How do you handle that? There was a very strong attachment between the two of them."

By the time Griffith turned 15, she had decided to move in with Johnson. By her 18th birthday, the two were engaged and got hitched in 1976. Their first marriage wasn't meant to be. Johnson later told People, “I had been with [ex-Miss World] Marjorie Wallace most of the night. Melanie called at about 4 or 5 in the morning. We professed undying love and flew to Las Vegas and got married.”

Their life as a married couple lasted only for six months. Griffith told the outlet, “It just wasn’t working for us, but we couldn’t split up. We thought it might work better if we were married. It didn’t. I got married in order to end the relationship.”

After the divorce, the actress moved on with Ryan O'Neal. Later she married her She's in the Army Now co-star Steven Bau and had a son, Alexander Griffith Bauer.

Griffith's marriage with Bauer didn't last long either and the couple got divorced in 1989, as per InStyle. Johnson, on the other hand, became a father to son, Jesse Johnson, with actress Patti D’Arbanville whom he was dating at the time.

Years later, Griffith and Johnson who were struggling with their addictions and alcoholism found peace in each other's company and rekindled their romance. They remarried in 1989. Explaining their reunion and the reason to remarry, Griffith told People, "There was always this connection. I can’t explain it."

"It’s almost like soulmates, and it always was. I didn’t want it to be like that sometimes, and sometimes I wanted not to love him. But maybe it was karma, and you have to go through all that to get to where we are now. Now it’s different. It’s like it was in the very beginning, but there is so much more,” said the Working Girl star.

In the same year, their daughter, actress Dakota Johnson was born. Hedren revealed that Johnson felt like "this is God’s plan." Griffith didn't feel any different. She said, "I believe some relationships are fated, and ours was probably one of them. I’ll always love him. He was my first love.” Unfortunately, the couple once again parted ways in 1994 just five years after their dream wedding, but this time forever.

"It is hard for me to imagine life without him. But we are changing in different ways." Griffith told People. Even though they weren't a part of each other's lives on a day-to-day basis, they remained close. Johnson even told Hollywood Reporter that there "still is" a lot of love between the two.

After their divorce, Griffith started dating actor Antonio Banderas in 1996. They had a daughter, Stella Banderas, and remained married for almost 20 years until their divorce in 2015. Johnson walked down the aisle with a school teacher Kelly Phleger in 1999.

Talking to Independent in 2014, he said, "I had a rare moment of clarity and asked this woman to marry me, and I still think that she’s under a spell and so I beg of you not to snap your fingers because God knows what will happen if she ever comes to." He is a father to three kids.