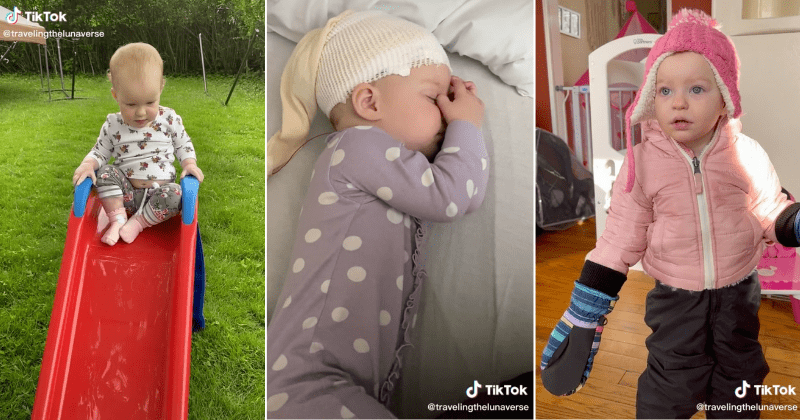 The keen observation of some internet users proved extremely helpful for a single mother of an almost 2-year-old who is on the autism spectrum.

Cassie—who goes by @travelingthelunaverse on TikTok—and Luna are a "world-traveling mother-daughter duo" who use the video-sharing platform to bring awareness about raising an autistic child and share tips and tricks for traveling with a young child. With over 618k followers, most of their videos receive tens of thousands of views. However, in a video posted on February 3, Cassie revealed that an older video had attracted a lot of attention from other TikTok users for a worrisome reason.

In the minute-long video, Cassie explained how a clip she'd previously posted on the platform led to many messages from concerned followers. "Just after my daughter's first birthday, I shared this video of her on a little red slide on my social media pages. I received a few messages saying: 'I don't want to freak you out but that kind of looks like a seizure,'" Cassie reveals. "That's when I first learned about absence seizures." She went on to explain that taking heed to the messages, she showed that particular video and a few similar ones to her daughter's pediatrician.

They were then referred to a neurologist who ran a number of tests and evaluations on Luna, including blood work, an electroencephalogram, and an MRI. "The first EEG showed no abnormal activity but her neurologist still believed she was having seizures," Cassie explains. Luna is scheduled to have a second EEG after her birthday in April. According to Cassie, an MRI scan conducted in September last year showed that a 5 mm mass was growing on her pineal gland, which plays a central role in the regulation of circadian rhythm.

"At first this was diagnosed as a pineal cyst but we got a second opinion and the neurosurgeon said, 'well, we can't really tell on the imaging. You need another MRI with contrast to be able to clarify between a cyst and a tumor,'" Cassie explains in the video. In an update posted a few days later, Cassie shared that Luna’s absence seizures were getting more severe. "Her absence seizures are progressing into mild chronic seizures which are more jerky," she explains in the video. "If this cyst is what is causing these seizures, it makes sense that they're not shown on the EEG because this is the deepest [part] inside of her brain, it's the center of the brain where the pineal gland is."

Fortunately, on February 10, Cassie revealed that the mass in Luna's head was not a tumor. "Luna's MRI on Monday confirmed she has a 5mm pineal CYST. We see her neurologist on Monday to discuss what comes next. Yesterday we also booked one-way flights to the Dominican Republic for February. Luna and I are going to do a little backpacking around the country together! Life never goes as planned and that's okay," she wrote. "Take control of what you can and keep moving forward progressively. We can do hard things! Thanks for loving our family, we appreciate you being here and are grateful that you've given us this space to share the story of us. Thanks for listening." In another video, Cassie explained that she decided to share their story in the hopes of informing more parents about absence seizures.

"Before learning about them, I had no idea that a seizure could be something different than your body falling to the ground and jerking," she explains in the clip. "All I knew about seizures were the stereotypical seizures... I'm not a professional at all but I'm just sharing our story and our journey. I hope sharing our story helps someone else."