Charlotte, who has been going to ballet classes, along with taking up horseback riding at the family's country home, loves "getting her hands messy" while making homemade pizzas, Kate has revealed. 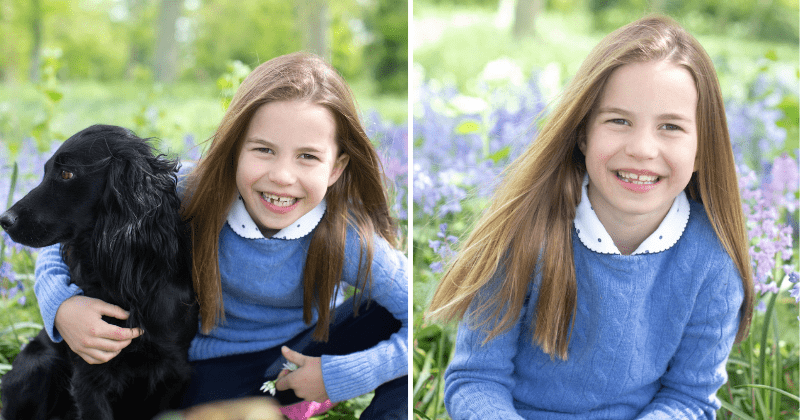 Time flies by so fast, and Princess Charlotte is growing up to be a beautiful young lady. It seems only yesterday that she was born, but she's already 7 years old!

In honor of Charlotte's 7th birthday on May 2, 2022, proud parents Kate Middleton and Prince William have released new photos of the princess, and the beautiful pictures were taken by none other than Kate Middleton herself.

"The Duke and Duchess of Cambridge are delighted to share three new photographs of Princess Charlotte ahead of her seventh birthday tomorrow," the couple said in a statement a day before the big day, according to PEOPLE.

The sweet portraits were taken in Norfolk over the weekend, where William and Kate also celebrated their 11th wedding anniversary.

Charlotte—who looks exactly like her dad—had the widest smile on her face as she posed in a field of bluebells near the family's country home, Anmer Hall. In one photo, she hugs the Cambridges' new dog Orla, a Cocker Spaniel that William and Kate adopted into their family from a litter raised by Kate's brother James Middleton last fall. The adoption comes after the death of their beloved dog Lupo.

Coincidentally, Charlotte also gets to spend her birthday at home with her family, because Monday is a public holiday in the UK. Several people left comments under Charlotte's adorable pictures, wishing her a happy birthday.

One user shared: "She is a beautiful little girl. It is beautiful seeing them growing up. Thank you for sharing this beautiful picture of Charlotte. Every child deserve to be celebrated on their birthday. Charlotte happy birthday! Wishing you a lots of fun."

"Also, love that you showcased her missing teeth. When our daughter was 7 she saved up her money and bought a mermaid tail and wanted to make a show about mermaids. The comments on the video were calling out her teeth. We were like she is 7!" commented another user.

Meanwhile, Charlotte, who has been going to ballet classes, along with taking up horseback riding at the family's country home in Norfolk, loves "getting her hands messy" while making homemade pizzas, Kate has revealed.

According to BBC, Charlotte was born at the private maternity Lindo Wing of St Mary's Hospital in Paddington, central London, on 2 May 2015, weighing 8lb 3oz. She is currently fourth in line to the throne and is the only daughter of Kate and Will, who are also parents to Prince George and Prince Louis.

Recently, Charlotte has been seen in public on two occasions. In March, she was at Westminster Abbey with her parents and Prince George for Prince Phillip, the Duke of Edinburgh's memorial service, and she was also in attendance at an Easter Sunday service at St George's Chapel in Windsor.