One particular shot from 1946 features a joyful image of the then-Princess Elizabeth beaming while showing her engagement ring to the camera. 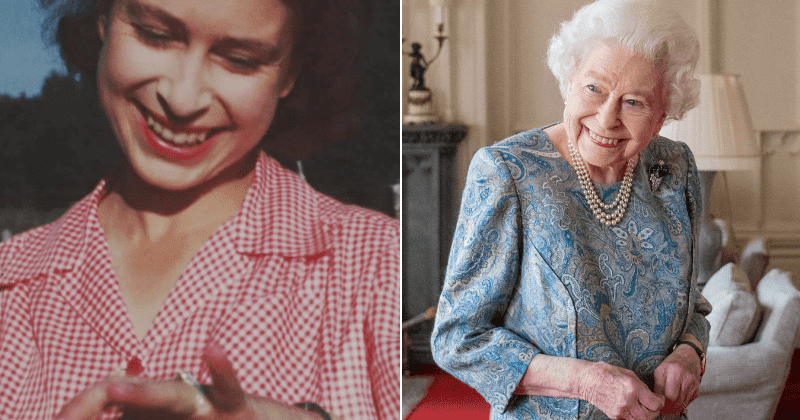 Queen Elizabeth, the longest-reigning monarch in British history, is set to tell the story of her life in her own words through a new documentary that premieres this month. Featuring never-before-seen home movies of the Queen as a young girl—known as Princess Elizabeth at the time—the 75-minute BBC documentary is titled "Elizabeth: The Unseen Queen."

According to a BBC press release, the program follows the Queen's life "from earliest childhood, being pushed in a pram as a baby by her mother, to her Coronation at the age of just 27 in 1953, following the death of her father George VI in 1952."

"Since the 1920s, the Royal Family have always filmed each other, but for decades hundreds of these reels of homemade recordings have been held privately by the Royal Collection in the vaults of the British Film Institute (BFI). Now, for this documentary, The Queen has granted the BBC unprecedented access to the footage, taking us inside Her Majesty’s life as never before through home movies shot by her, her parents, Prince Philip, and others," it states.

The documentary takes viewers behind the scenes of a number of pivotal moments in the Queen's early life, including the first extended visit of Prince Philip to Balmoral in 1946 while the couple's engagement was still not public.

One particular shot from the vacation—released by the BBC Studios Press Office on Saturday—features a joyful image of the then-Princess Elizabeth beaming while showing her engagement ring to the camera. Two other images were also released over the weekend, with one showing Elizabeth enjoying a visit to South Africa in 1947 and the other featuring Elizabeth and her sister Princess Margaret with their beloved father King George VI on board the HMS Vanguard in 1947.

As per the press release, some of the other unseen moments from the Queen's private life that will be showcased in the documentary include proud moments between the monarch's parents and their grandchildren, Prince Charles and Princess Anne; George V sailing with the Queen Mother off the Isle of Wight in 1931; and footage of the royal family at Balmoral in 1951, which marks the King's last visit there before his death.

"Unlike conventional documentaries featuring interviews and narration, 'Elizabeth: The Unseen Queen' relies largely on The Queen's own voice and words, alongside newsreel audio. The filmmakers listened to over three hundred of The Queen's speeches, spanning over eight decades. The result is a visually rich and immersive film of unparalleled historical record," it states.

Simon Young, the BBC's Commissioning Editor for History, said in a statement: "We are honored that The Queen has entrusted the BBC with such unprecedented access to her personal film collection. This documentary is an extraordinary glimpse into a deeply personal side of the Royal Family that is rarely seen, and it's wonderful to be able to share it with the nation as we mark her Platinum Jubilee."

Claire Popplewell, Creative Director for BBC Studios Productions, added: "As program-makers who have previously worked closely with the Royal Household on ceremonial and celebratory broadcast events and programs, the production team was under no illusion quite how special having access to this very personal archive was."

"Being able to draw upon the self-recorded history of a young Princess Elizabeth and her wider family - and allowing The Queen to tell us her own story - is the very heart of this film," Popplewell added. "Elizabeth: The Unseen Queen" will air on BBC and on its streaming service iPlayer on May 29, kicking off a week of festivities that will celebrate the Queen's 70 years on the throne.