Reynolds' jaw literally dropped as he watched her place her hands on her hips for the cameras before he broke into a smile. 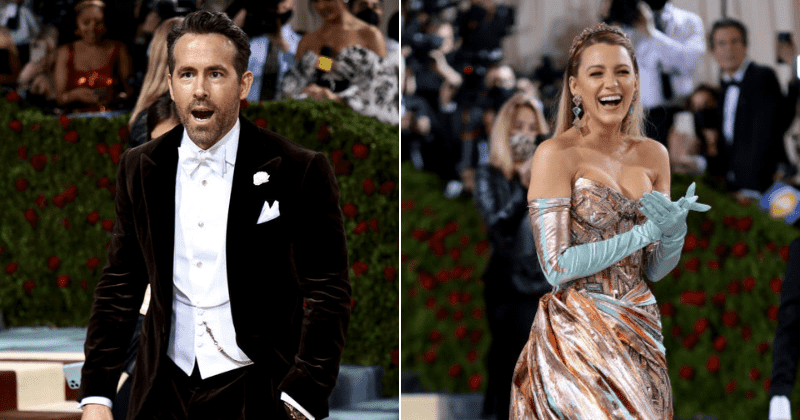 The first Monday of May is an exciting day for several people around the world because it's time for the Met Gala. This year was no exception with celebrities rocking the “Gilded Glamour" theme.

Blake Lively was one of the first stars to hit the red carpet at the 2022 Met Gala, according to Good Morning America. The actress, who is a co-chair for the star-studded gala with her husband, Ryan Reynolds, wore a custom gown from Versace. Reynolds wore his white-tie best in a velvet tuxedo and white bow tie, per PEOPLE.

Lively, who is known for her sense of fashion, struck a confident pose on the red steps of the Metropolitan Museum of Art, in her red-toned gown, complete with a large bow, before walking further on the carpet, only to change her look from head to toe!

With some assistance from three suited helpers, the actress' bow was untied, unveiling a long blue train, that cascaded behind her.

Lively honored the dress code by channeling the time period between 1870 to 1890 and asking attendees to "embody the grandeur Gilded Age New York" per Vogue—by wearing a detailed gown that honored New York City. In fact, she told LaLa Anthony that the color choices were to represent the patina aging that copper experiences over time.

While in conversation with Vogue, Lively explained the inspiration for her look. "I thought instead of looking to fashion to influence the dress, I looked to New York City architecture and the classic buildings." She also told reporters on the red carpet, adding that she worked closely with jeweler Lorraine Schwartz to help tell her Met style story.

"The draping [represents] the Statue of Liberty, plus the crown which has seven tiers, the Statue Liberty has seven rays representing the sun's rays and then also the 7 seas and continents which represents welcomeness, inclusivity, and freedom," she continued. "I sound like a Wikipedia page. — she has 25 windows so Lorraine [Schwartz] put 25 stones at the bottom, so they're all New York City references."

But what really stole the show was Reynolds' look after he saw his wife's transformation. The Deadpool star continued up the stairs so Lively could get some more images clicked, and a member of the crowd managed to capture him looking back in awe at his wife while she underwent her change.

A Twitter video shows Reynolds' jaw literally dropped as he watched her place her hands on her hips for the cameras before he broke into a smile. He later could be seen grinning proudly and clapping as members of the crowd cheered for Lively's impressive display.