While the illusion itself says it's supposed to be either a fish or a mermaid, people on the internet can spot anything but that. 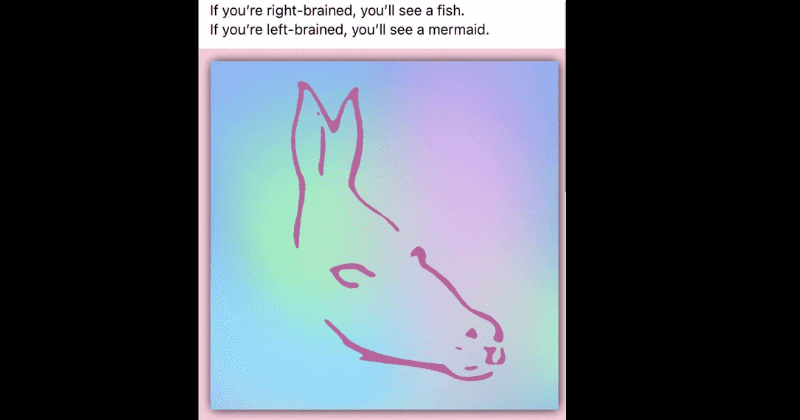 It only feels like yesterday that the internet broke over a picture of a dress, with some claiming it to be blue and black while others insisted it was white and gold. It's 2022, and it looks like we're right back to square one, because here's another optical illusion that's leaving the internet divided.

Tell the truth. Does anyone actually see fish to a mermaid? Anyone? pic.twitter.com/896vFUqPi6

However, people were quick to note that the illusion is not new. A version of the drawing without the colorful background has been around for a long time and is referenced in a 2010 study published in the British Journal of Developmental Psychology about children with autism. In the study, the children were tasked with determining whether a similar line image depicted a donkey or a seal.

It's a donkey, though. pic.twitter.com/a60ccFCQ2G

I see a donkey https://t.co/O8C3QdOxqN

Someone said a seal and now I can’t unsee it.

I thought it was a horse. What does THAT say about my brain...

Wait… that’s not a damn seal?

And I thought it was a donkey.

I see a Kangaroo sucking a pacifier like it was at a rave, in addition to the seal, who looks like it's diving...

I seen the horse 1st then as I looked at it I seen the seal but I cannot see a mermaid no matter how I look at it. The fish is a stretch the mermaid is non-existent

My first thought was horse or donkey. I can also see a puffin, or maybe a penguin, sliding on its belly. But, then someone mentioned a seal & I can see that, too; or, a sea lion.

A fish is stretching it. A mermaid? Nope. No mermaids. Not even with the help of an edible.🤣

So what are we center brained?😂😂😂