"I was afraid to lose her. I wanted to cry, but I could not cry," her husband Viktor Vasyliv said. 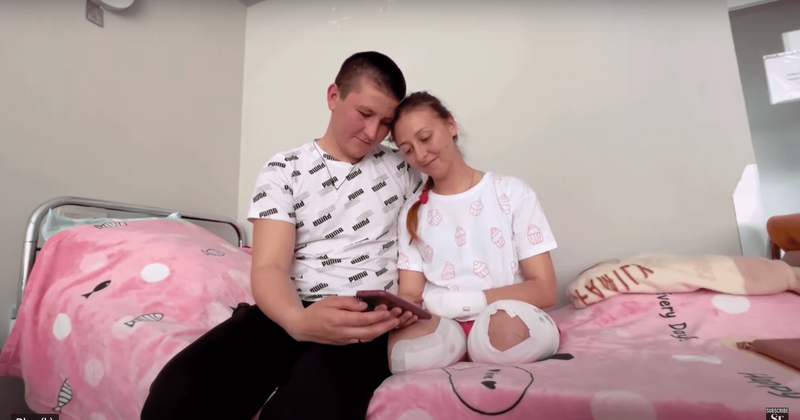 Oksana Balandina and Viktor Vasyliv, both 23, became man and wife on May 2, 2022. Their wedding was their dream come true, but they were forced to celebrate nuptials at a hospital in Lviv, according to Reuters.

On March 27, 2022, Balandina was injured in a landmine explosion while walking "on a familiar path" to their home in Lysychansk, the Lviv Medical Association told Sky News.

Despite being injured, she managed to warn Vasyliv, who was walking behind her. Thankfully, he did not get injured. "I only managed to shout to him [Vasyliv]: 'Honey, look!' " the Ukrainian nurse said.

"If it was not for Oksana, I don't know what would have happened," he said. "She is so strong." Since the explosion, Balandina has undergone four surgeries, and both her legs and four fingers on her left hand have been amputated.

Watch: Oksana Balandina and Viktor Vasyliv celebrated their nuptials at a hospital in Lviv, marking a happy moment amidst what has otherwise been a challenging time#UkraineWar #wedding #dance #Lviv https://t.co/YSmfdHJd8C pic.twitter.com/TrY5UKAlJq

"But thanks to the support, I accepted it. I need to keep living. It is not the end of the life. If God left me alive, that's my destiny."

The couple was first evacuated to Dnipro, where she also received care. The couple then traveled to Lviv, which is less than 50 miles away from the Polish border, per The Los Angeles Times, where they tied the knot in a civil ceremony at the Lviv Surgery Center.

"Life should not be postponed until later," the Lviv Medical Association said of the couple's decision to get married despite the unfortunate situation, adding that "in six years together [they had] never found time for marriage."

Even though only patients and volunteers at the hospital were present for the modest festivities, thanks to a video posted on the hospital's social media, the world can now witness what true love looks like.

In the heartwarming video, Balandina, who wore a white dress and a pink flower crown, had her arms around her husband's neck as held her up in his arms. As their dance came to an end, they shared a kiss, prompted by claps and cheers from onlookers.

The bride, meanwhile, who said that her 7-year-old son and 5-year-old daughter are with their grandparents in central Ukraine, hopes to travel to Germany soon to get prosthetics and continue to heal from her traumatic injury.

Now, even though the road ahead seems long, with no sight of peace in Ukraine, Balandina says she can only focus on the here and now and on her recovery. "I want to go back to our town, to Lysychansk, but frankly speaking, I am worried for my children. When the war is over, there will be so many things happening. The road was mined… It is scary," she said.

However, Vasyliv said he's grateful for each day that he shares with his new wife. "I was afraid to lose her. I wanted to cry, but I could not cry. I was shocked, I could not comprehend that it was happening indeed. It was terrifying to lose the person I love," he said.