"Yet, sitting there conversing with Will Smith, I was still that little, terrified, third-grade Black girl." 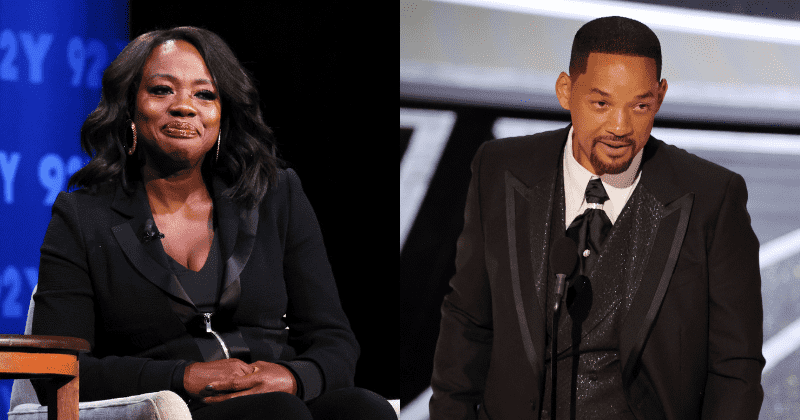 Viola Davis credits Will Smith for helping her confront her childhood trauma.

In her raw new memoir Finding Me, the Oscar, Emmy and Tony-winning actor recounts a life-changing conversation she once had with Smith while on the sets of the 2016 movie Suicide Squad. An excerpt from the elegantly written but sometimes harrowing memoir—shared by USA Today—reveals how Smith asked Davis who she really was and how her past trauma helped shape who she is as an adult. A discussion with the King Richard star on the topic gave her a whole new perspective on some trauma she'd been dealing with for decades, Davis reveals in her book.

#ViolaDavis reveals that a conversation with #WillSmith caused her to revisit childhood traumahttps://t.co/eHna2KbxoZ

Finding Me details how when Davis was in the third grade, "eight or nine white boys in my class made it their daily, end-of-school ritual to chase me like dogs hunting prey." According to the now-highly-respected star, the boys would throw things like pine cones, rocks and even bricks at her and call her names and racial slurs. When she ran from them, Davis recounts in her memoir, she felt like she was running for her life. She spent decades dealing with that trauma until she had an "aha" moment while on the set with Smith.

.@violadavis' "Finding Me" is a story of a woman who has always fought for more.

To read her memoir is to understand just how hard she has worked to build the career and life she has today https://t.co/l4Y79hdSKE

"Viola, who are you?" he asked her, Davis reveals. When she enquired what he meant by that, Smith explained: "Look, I'm always going to be that 15-year-old boy whose girlfriend broke up with him." This is said to have forced Davis to ask herself that question, and the answer took her right back to that painful anecdote from her childhood. "There I was, a working actress with steady gigs, Broadway credits, multiple industry awards, and a reputation of bringing professionalism and excellence to any project," she shares in her memoir.

"Hell, Oprah knew who I was. Yet, sitting there conversing with Will Smith, I was still that little, terrified, third-grade Black girl," Davis admits. Meanwhile, the 56-year-old, who plays Michelle Obama in the new Showtime series The First Lady, recently insisted critics "serve no purpose" as she responded to negative feedback about her portrayal of the former first lady. "Critics absolutely serve no purpose. And I'm not saying that to be nasty, either," she said, reports Daily Mail. "They always feel like they're telling you something that you don't know. Somehow that you're living a life that you're surrounded by people who lie to you and 'I'm going to be the person that leans in and tells you the truth.' So it gives them an opportunity to be cruel to you."

Earlier this month, Davis admitted that she found playing Obama to be "absolutely terrifying." She shared: "You're terrified whenever you start a job because you are afraid you are going to be found out - that's big imposter syndrome. But with Michelle Obama, it's like everyone has ownership over Michelle Obama. I mean, her book came out and it was [on every] bestseller list, everyone knows what she looks like what she sounds like, what her hair [is like], you know?"