Bunnie explained that she was having health problems that doctors couldn't diagnose and that's when she decided to remove her implants. 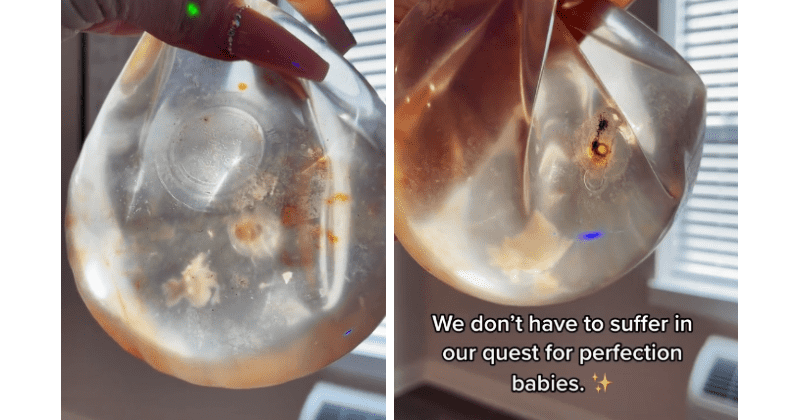 One woman shocked the internet when she had her saline breast implants removed and posted pictures of them.

The  TikTok user, who goes by Bunnie (@xomgitsbunnie), shared a video of the implants she had explanted and explained how they were causing her pain and her health has since improved.

The video also appeared to show the saline implants containing copper-colored stains, which she alleged were mold. Bunnie explained that she experienced health issues and doctors couldn't really narrow down what was causing the issue. After suspecting that her breast implants, which she had for 13 years, may have something to do with it and she decided to have them removed in November 2020.

The video went viral garnering more than 3.2 million views and 209k likes. “I had implants in for 13 years,” she told her 1.7 million followers via the on-screen text on the video. “I started suffering so many symptoms that not one doctor could pinpoint. So I explanted in Nov 2020 and it was the best decision I ever made! All symptoms went away, except anxiety sometimes.”

She kept the saline breast implants in a secure plastic bag and held it up for the video. “Look at that. That goes inside of a human body,” she said in the video, before stating that the implants appeared to have mold within them. “Look at the mold. No wonder why women are having so many complications with these things. It’s disgusting,” she said. Later in the video, she explained that she suffered from “breast implant illness.”

"Breast implant illness (BII) is a term that some women and doctors use to refer to a wide range of symptoms that can develop after undergoing reconstruction or cosmetic augmentation with breast implants," according to Breastcancer.org.

"Breast implant illness is not an official diagnosis, it encapsulates a wide range of symptoms that many report after receiving breast implants. Some of the symptoms can include “joint and muscle pain, chronic fatigue, memory and concentration problems, breathing problems, sleep disturbance, rashes, and skin problems, dry mouth and dry eyes, anxiety” and more.

“Although saline-filled implants are presented and regarded as the ‘safe’ option compared to silicon, containing only salt and water, they are rarely hermetically ‘sealed,’ noted National Center for Health Research’s website. "Moreover, their filling valves aren’t perfectly secure. As a result, they allow the body fluids of the user to infiltrate, along with bacteria, yeast, and molds.”

Bunnies urged her followers to check with their doctors. “Please make sure you talk to someone if you think [your] implants are causing breast implant illness,” she wrote. She also urged women to accept their bodies and celebrate them. "My natural bewbies look soooo good and barely any scarring," she wrote. "I'm also more confident with my naturals. We don’t have to suffer in our quest for perfection babies.”

Many praised her for having the implants removed while some argued that it depended on each individual. "Implants aren’t meant to be permanent you have to replace them after so many years," argued one person. "I’m not judging anyone but I’m happy to be team natural," wrote another.

While Bunnie claimed the mold contributed to her illness, some speculated that the mold only developed after they were removed. "Mold doesn’t grow while inside the body. Having it outside the body with moisture it can grow," one user wrote.