She could talk to her family only if she had completed her 10,00 steps in a day. 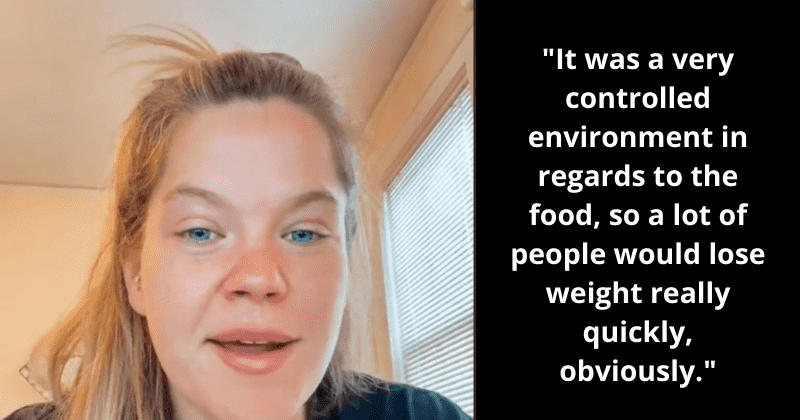 Fat camps so actually exist in the US, but for others around the world, it seems like a made-up concept. So when 28-year-old Hannah, an HR consultant and online content creator from North Carolina shared a TikTok video about the things she experienced during her time at a fat camp, people were shocked to see what exactly she endured.

Hannah detailed how she was put on a strict low-calorie, low-fat diet while attending the now-defunct Wellspring Adventure Camp, back in 2009. But before getting into the details, Hannah shared that she wasn't forced to attend. She went there willingly.

"I want to preface that I chose to go to fat camp willingly," she told BuzzFeed. "I struggled with my weight at an early age after some traumatic things in my life, and desperately wanted to fit in with my peers, so my parents had the means to send me, and I went."

The woman, who started dieting to lose her weight from the fourth grade, said that the camp's advertisements made its weight-loss methods seem scientific and effective but they weren't sustainable in the long run.

She compared Wellspring Adventure Camp to a summer camp, but with "a lot of fat kids."

She reportedly had to do a weigh-in as soon as she arrived. "They immediately weigh you when you get there and go ahead and tell you your BMI and tell you that you're overweight, which, duh, I knew," she said. "They give you your little book where you literally track everything that you eat. You also track your steps on a pedometer every day."

The HR consultant, who weighed around 216 pounds at the time, revealed that almost everyone at the camp was put on the same diet. The only difference was based on their gender. She was put on the less than 1,200 calories and less than 20 grams of fat per day eating plan. "Literally what is that... For a toddler?" she said in her TikTok video.

The living situation wasn't too ideal either, Hannah recalled. She was put in the smallest cabin with 16 other girls in bunk beds. There were only two showers, two toilets, and two sinks, so they had to shower in rotation.

"You got five minutes to shower to preserve hot water, but if you were one of the last on the list you were gonna be showering cold," she said. "It was horrible."

They were also forced to be active from 7 am to 9 pm every day, with breaks only for breakfast, lunch, an afternoon siesta, and of course, dinner. "It was a very controlled environment in regards to the food, so a lot of people would lose weight really quickly, obviously," she explained. "One, because you're eating less than 1,200 calories a day, and really the food had no nutritional value. It was just about being low-calorie."

Breakfast mostly consisted of low-fat yogurts, bagels, turkey bacon, and egg whites, while lunch and dinner had more foods that were high in protein and low in fat along with vegetables and fruit. They were also given snacks—like100-calorie Snackwell's and Fig Newton— between meals twice a day.

But despite it all, going to a fat camp is expensive and Hannah revealed that her mom paid a lot of money for this. "I did end up losing 40 pounds over 10 weeks, and let's be honest, that's pretty unhealthy," she said. "It really kickstarted my disordered eating because you were rewarded for how less you ate. You were rewarded for how active you were."

I mean, she could talk to her family only if she had completed her 10,00 steps in a day. But, despite Hannah having a lot of issues about how the camp was run, she said it wasn't all horrible. She enjoyed some of the activities, like hiking, and she became friends with her fellow campers, though they are no longer in touch.

However, once she got out of camp, everyone noticed her weight loss and she felt good for a hot minute, but since she was no longer in such a controlled environment, she put all the weight back. She shared that she spent years dieting to try to lose weight because she ended up gaining back more than she had initially lost.

But now, she has made peace with her weight, and it doesn't really bother her much. "I think I am in a place now where I finally found something that works for me and that's all about balance," she added.